The “Grapes of Wrath” was written in 1939, but scenes of John Steinbeck’s novel still play out today.

This time not near a stream of discarded oranges, but a supermarket dumpster.

When winter storms knocked out Portland’s power grid, they left a Fred Meyer store without electricity. Following the health department’s requirements, supermarket staff threw all the perishable goods into a dumpster behind the store.

Before long, “Images on social media showed mountains of packaged meat, cheese and juice, as well as whole turkeys and racks of ribs that had been tossed into two large dumpsters near the store,” the Oregonian reports.

Local residents who discovered the dumpster tried to salvage the discarded products, but were instead turned away by armed law enforcement. Almost a dozen Portland cops were sent to guard trash from the hungry residents who pay their salaries.

The Portland Police Bureau later said someone at the grocery store had called at around 4 p.m. Tuesday to report that people were “arguing with employees and refusing to leave the property.”

Officers arrived at about 4:30 p.m. after the police received a second call from the store.

“After that, other people started showing up and asking them, ‘Why are you guys guarding a dumpster?’” Mckniff said.

As Vice reports, “Between 5:05 p.m. and 5:15 p.m.—when the most cops were at the scene—there was a lieutenant, one sergeant, six officers, and three trainees present.”

“Unfortunately, due to loss of power at this store, some perishable food was no longer safe for donation to local hunger relief agencies,” the Fred Meyer account posted to Twitter. “Our store team became concerned that area residents would consume the food and risk food borne illness, and they engaged local law enforcement out of an abundance of caution. We apologize for the confusion.”

Individuals who salvaged items from the dumpster after police left the scene noted that the expiration dates for some of the discarded products was another month away, the Oregonian reports. 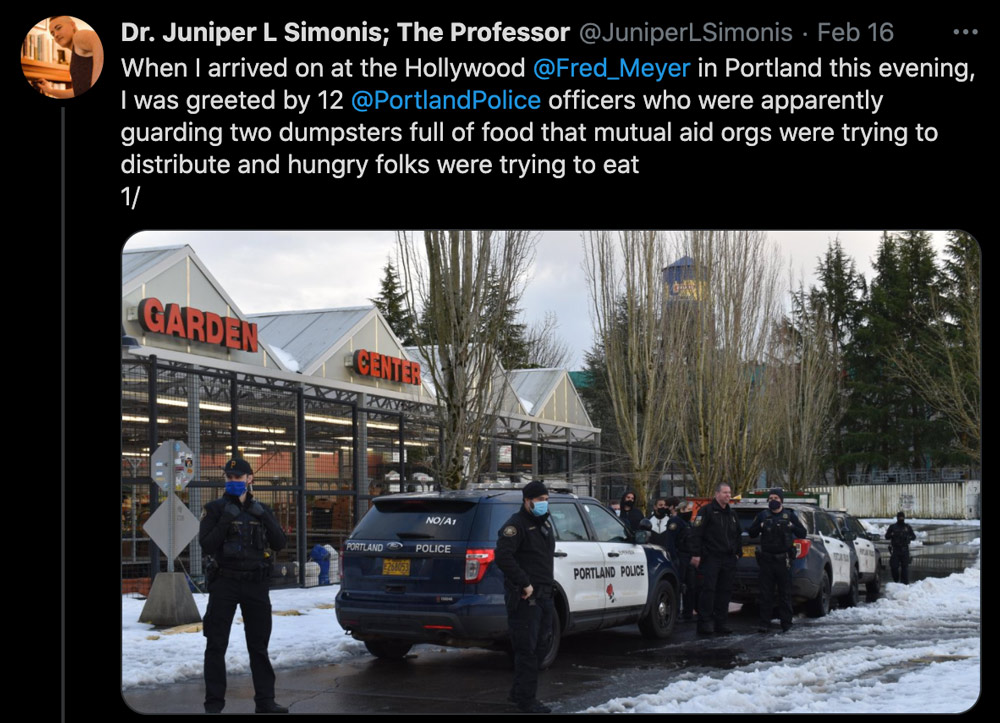 “Getting 12 PPB officers called on me for trying to liberate dumpster food to feed folx in warming shelters during a winter storm is very on-brand for me and the City of Portland,” Twitter user @teamraccoonpdx posted. “But now the food is being liberated from the dumpsters by the car loads & distributed to folx in our community experiencing food insecurity!”

According to NBC News,
workers at Fred Meyer called the police a third time, but officers did not return to the scene.

“None of this makes sense to me except through the lens of severely ingrained policing and a culture of disrespect for human dignity,” said Juniper Simonis, a journalist documenting the incident.

Simonis said some of the people who were collecting the food were in mutual aid groups that provided food and resources to people at warming centers, and “not there for selfish reasons.”

“It’s not a bad situation or vandalism, it’s literally the exact opposite — feeding hungry people,” she said.

There’s no reason edible food should go to waste when so many are hungry. Click the button below and join a growing number of those calling for an end to this injustice!

Excess Food Should Feed the Hungry, Not a Dumpster! Millions of tons of perfectly good food are sent to the landfill every year when they could feed hundreds of thousands of hungry people.

Demand that the Food Industry Association incentivize giving this food to the hungry, rather than letting it go to waste!