Two Dutch fashion designers have created a new way to help people who are homeless survive harsh winter weather thanks to water-resistant suits that zip to the bottoms of jackets. The company that manufactures Sheltersuits uses several materials and methods that assist more than just people who don't have a place to call home. The need to help the homeless comes from a personal story from one of the Sheltersuit creators.

Dutchman Bas Trimmer's inspiration for this project came from a personal tragedy. A father of two of his friends died living on the streets in cold weather in December 2013 after a homeless shelter evicted him. Trimmer thought one of his pullover jackets could have saved the man's life. However, Trimmer and a colleague began to think how to take warm jackets for people who are homeless one step further, according to Dafne.

Trimmer, along with Alexander de Groot, designed a combination coat and sleeping bag that is water-resistant, warm and fireproof to meet the needs of homeless people who face these issues on a daily basis while surviving cold temperatures. Although this project doesn't solve the complex issue of homelessness, these suits give people who are homeless a temporary way to reduce exposure to cold temperatures during winter months. The pair also came up with a child's size when the two learned of a homeless family in Trimmer's hometown of Enschede. 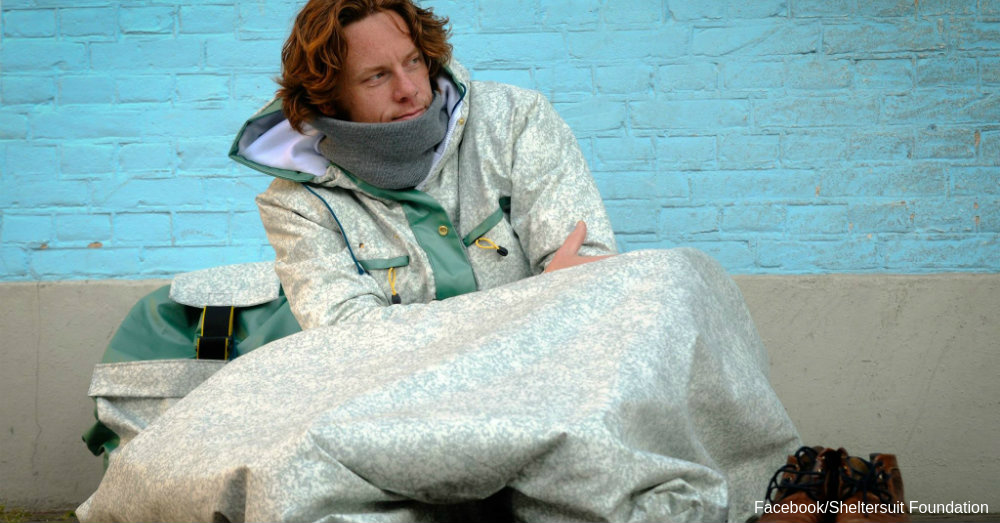 The benefits of these suits go beyond keeping 2,500 Dutch citizens warm, notes Treehugger. Trimmer and de Groot repurpose and recycle tents from music festivals to create the outer material for the suits. The thick material keeps water and air off of people's skin. Professional tailors who have fled from Syria volunteer to turn tents into uppers and lowers that keep extremities warm at night. In return for making these suits, Syrian volunteers receive assistance finding permanent housing and driving lessons in The Netherlands. Sheltersuits help three causes all at once, including homelessness, the Syrian refugee crisis and the environment.

People who are homeless can zip the top of the suit to the bottom of a jacket to form a water-resistant seal. The bottom part folds neatly into a specially designed backpack, which solves the issue of how to carry around such an item, states Dezeen. The bottom of the leg portion opens without unzipping the entire suit in case a person who is homeless needs to walk or run quickly.

Several Dutch and European media outlets noticed this volunteer project ahead of Dutch Design Week in October 2015. Interviews and media coverage helped get the word out regarding this simple way to help people who are homeless. Although these water-resistant accessories may not solve other issues that lead people to homelessness, such as mental illness or illegal entry into a country, this project does give people relief from winter's bite.

Once de Groot and Trimmer received initial funding, the pair made 100 suits within three weeks. Thanks to corporate sponsors, the homeless receive these cold-weather additions for free. Once the design duo took care of local folks, Trimmer and de Groot took their Sheltersuits on the road to other European cities.

The Facebook page of the Sheltersuit Foundation touts 50 items distributed in Paris in November 2015, while another 50 suits went to Syrian refugees when one volunteer drove to Istanbul, Turkey. As the suits made their way across Europe to Turkey, the volunteer handed out the temporary shelters to Syrians who need them the most. Syrians, in particular, face a humanitarian crisis that includes homelessness, hunger and unemployment as millions of people continue to flee the civil war raging in that country. Do your part to alleviate the urgent needs of the Syrian refugees and other homeless people by going to The Hunger Site.