Scientific studies show that climate impacts on food and agriculture are adversely affecting our health. Increasing levels of CO2 have lead to less nutritious crops; increased incidence of diseases and pests which lead some farmers to use more toxic on-farm chemicals; and rising temperatures prompting an increase in waterborne bacteria, making it harder to keep irrigated crops safe.

Every human on Earth is impacted by these threats, but farmworkers moreso than most. Between 2 and 3 million farmworkers in the U.S., many undocumented and from South and Central America, are forced to work outside all day and given subpar sleeping and living situations. While the job of an average farmworker hasn’t changed in many years, the conditions they must work in have. The increasing effects of climate change “amplify existing hazards” for these workers, Howard Frumkin, professor emeritus of environmental and occupational health at the University of Washington School of Public Health, told The Counter.

“Speaking as a physician, this set of challenges [among farm workers] has every hallmark of being an emergency.” Frumkin said.

According to the study, “Too Hot to Work: Assessing the Threats Climate Change Poses to Outdoor Workers, climate change will quadruple US outdoor workers’ exposure to hazardous heat conditions between now and 2065, jeopardizing their health and placing up to $55.4 billion of their earnings at risk annually. The average outdoor worker risks losing $1,700 to $7,000 in annual earnings due to lost work days from extreme heat, the Union of Concerned Scientists reports.

Heat is the nation’s leading cause of weather-related deaths, according to the Center for Climate and Energy Solutions and heat waves are becoming more intense and more frequent as the planet warms. In a statement, President Biden vowed that Americans would not face this threat alone.

“Rising temperatures pose an imminent threat to millions of American workers exposed to the elements, to kids in schools without air conditioning, to seniors in nursing homes without cooling resources, and particularly to disadvantaged communities,” President Biden wrote in his letter to mobilize an all-of-government effort to protect workers, children, seniors, and at-risk communities from extreme heat.

Exposure to wildfire smoke is also growing threat to farmworkers, many of whom are forced to work through fires that are becoming more frequent, more severe, and more toxic than ever, Inside Climate News reports. Each new year arrives with bigger and more destructive fires,  and scientists still have not identified all the chemicals in smoke and the risks they pose. Farmworkers are directly impacted by the smoke and falling ash from these fires, added to that the stress of lost income and working near a raging fire and the negative impact is amplified.

The Asunción Valdivia Heat Illness and Fatality Prevention Act is named in honor of Asunción Valdivia who died in 2004. Valdivia, 53, fell unconscious after picking grapes for ten hours straight in 105-degree temperatures. Instead of calling an ambulance, Valdivia’s boss told the farmworker’s son to drive his father home. Valdivia died of heat stroke on the way home.

“I will never forget Asuncion Valdivia or how his tragic death could have been avoided,” said Rep. Judy Chu, one of the sponsors of the bill. “Whether on a farm, driving a truck, or working in a warehouse, workers like Asuncion keep our country running while enduring some of the most difficult conditions, often without access to water or rest. According to a 2015 study by OSHA, this has led to 37 work-related deaths and thousands of injuries and illnesses. And it has only gotten worse as climate change has led to dangerously high temperatures in parts of the country not accustomed to high heat. Every worker deserves to be protected from preventable death, and we know that requiring breaks, shade, and water can save lives. I’m proud to once again reintroduce this important bill to support the workers who support our country.”

2021 marks the 50th anniversary of the Occupational Safety and Health Administration,  yet many farmworkers in the U.S. still have no legal protection against one of the oldest, most serious and most common workplace hazards, said House Committee on Education and Labor Chairman, Bobby Scott.

“Heat illness affects workers in our nation’s fields, warehouses, and factories, and climate change is making the problem more severe every year,” Scott said. “This legislation will require OSHA to issue a heat standard on a much faster track than the normal OSHA regulatory process. Workers deserve no less.”

“As climate change brings scorching heat temperatures to Southern Arizona and other places across the country, it’s negatively impacting our workforce and more often creating conditions that can prove fatal,” said Rep. Raúl M. Grijalva. “A federal OSHA standard for heat stress is necessary to protect our workers and limit their exposure to excessive heat in both indoor and outdoor environments. Climate change is no longer a theoretical threat, and lack of aggressive action to address it has made a standard to protect our workers absolutely urgent.”

The reality is, farmworkers put their health at risk every day in extreme conditions, including extreme heat in order to put food on our tables. Moreover, Latino workers are disproportionately represented in the numbers of those farmworkers exposed to potentially fatal heat conditions.

“This legislation will help save lives by ensuring basic protections from extreme heat such as the right to water, shade, and rest breaks,” said Congressional Hispanic Caucus Chair Dr. Raul Ruiz. “Throughout the COVID-19 pandemic, we have desperately needed a stable workforce for our food supply chain. Farmworkers are some of the highest risk workers and are dying to feed America so that we can stay healthy, fed, and beat the virus. We must honor the work of these high-risk workers and protect our food supply chain by protecting farmworkers and ensuring their safety on the job.”

Sign the petition below and demand the U.S. government protect outdoor laborers against rising temperatures
by passing the Asunción Valdivia Heat Illness and Fatality Prevention Act.

Stand Up for America’s Farmworkers 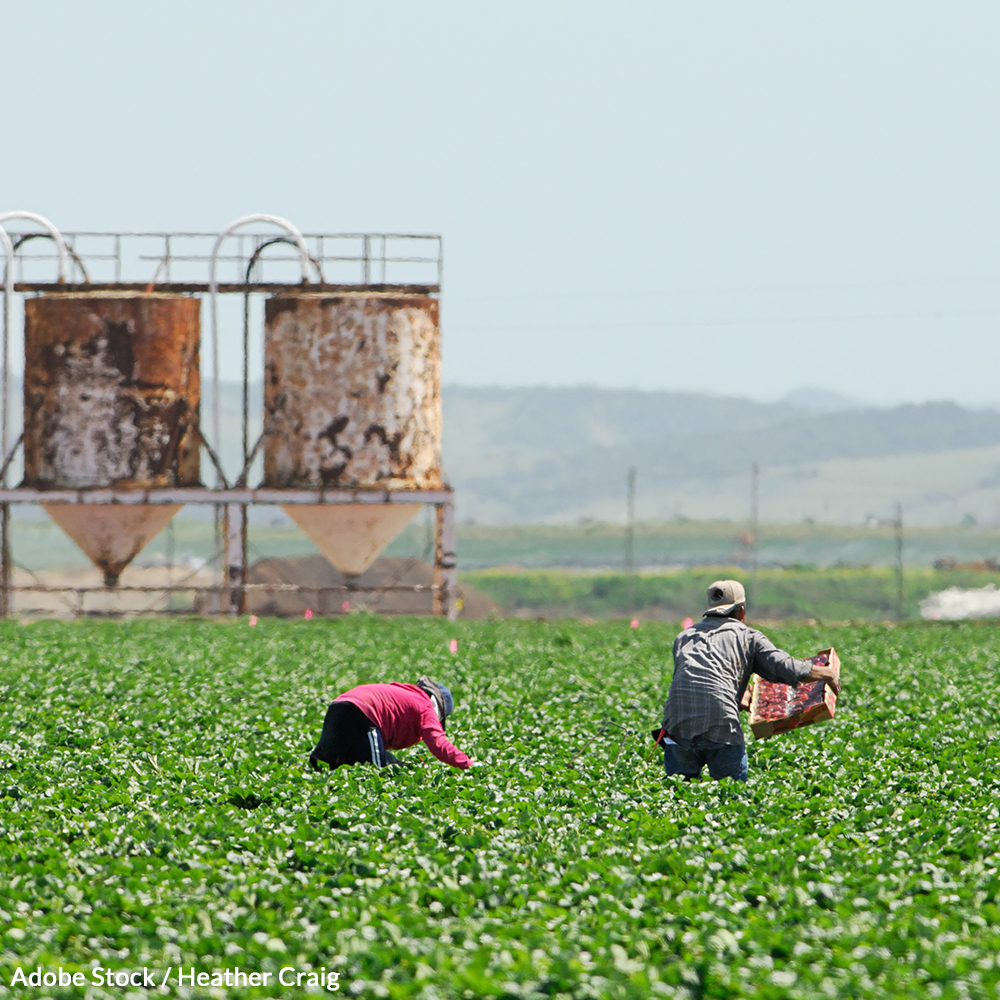 Between 2 and 3 million farmworkers in the U.S., many undocumented and from South and Central America, are forced to work outside all day and given subpar sleeping and living situations.

Farmworkers put their health at risk every day in extreme conditions, including extreme heat in order to put food on our tables.

Demand protections for our farmworkers today!